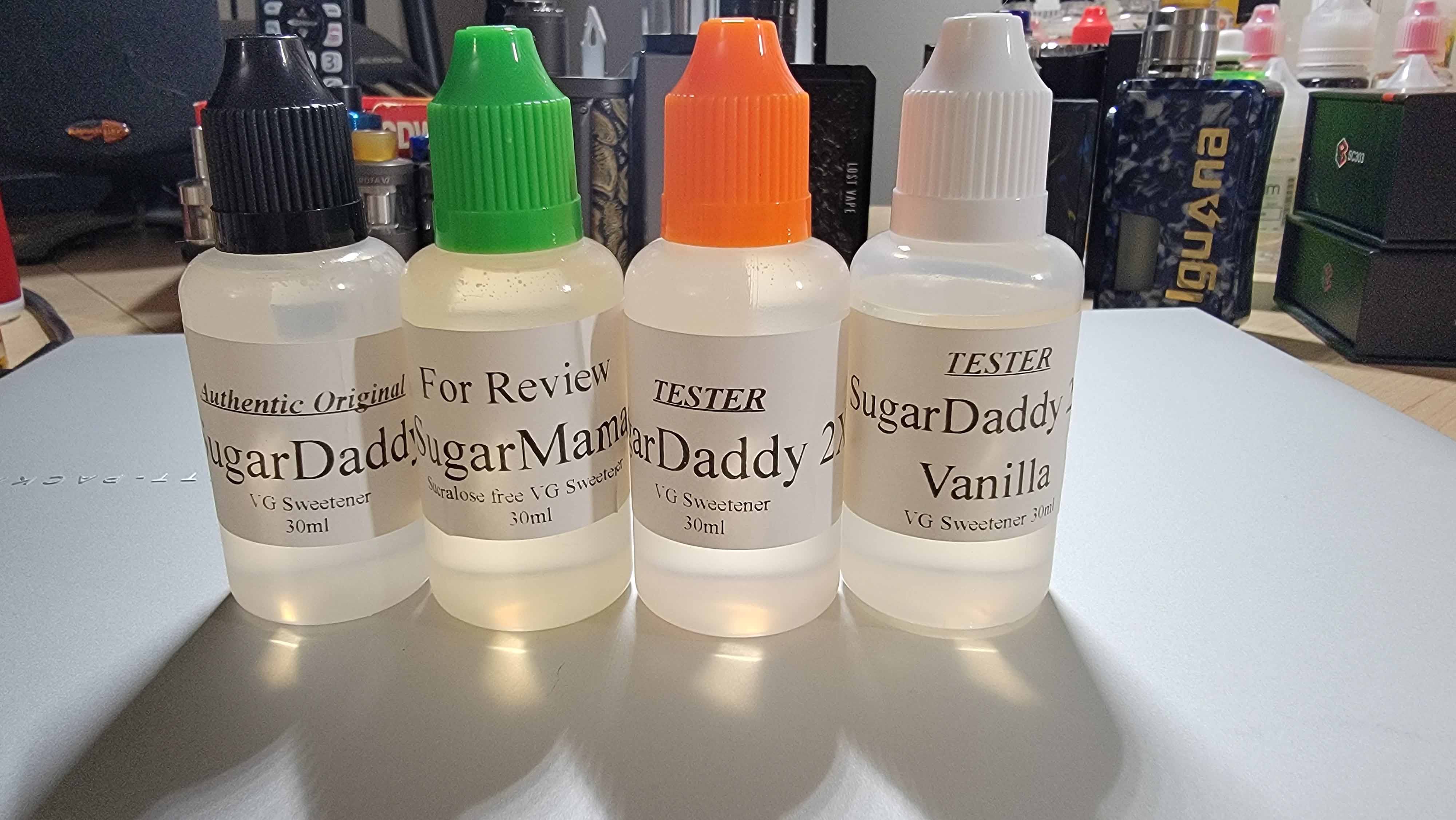 I have NEVER done a test series on just sweeteners, so this will be all NEW for me, and you guys. Because Rick included (2) 2x (Double Strength) samples as well, beyond mixing testing in mixes, I felt it best to test ALL of them at the same testing weight, to not only compare/contrast, but to see how much stronger the 2x versions were.

All testing done with dry burned coils, and fresh cotton between every test, on the beloved SteamCrave RDTA v.1 using dual vertical, Kanthal, 7 wrap coils. All tested @ 65 watts, at 1%, and in a 70v/30p mix.

**SugarDaddy (Regular) (Rick's) 1% (09-17-22)**  --  Alright, alright, alright, FINALLY down to the testing.  Having seen Rick's sweeteners used over the years and never having tried any of them, I finally get to see what's what.  Starting out with Rick's SugarDaddy regular sweetener.  I finger tested ALL of these sweeteners, which is something I never do, but, my thoughts were, if a flavor/sweetener tasted bad on the finger, it probably wouldn't taste any better when vaping.  This one, tasted SUPERIOR to about EVERY sweetener I currently use, off the finger.  WOW, that's saying something.  Sweet (duh), but it actually DID taste like a real sugar cube.  ZERO aftertaste, chemical notes, or anything off-putting.  Just clean, sweet goodness.  Moving onto the vape test, it stayed EXACTLY the same.

Now, only for YOU GUYS, do I vape JUST sweeteners, just remember that LOL.  At 1% in a 70v/30p mix @ 65 watts, the "sugar cube"-ed-ness continued, with just as clean of a taste as it had when finger testing.  There was a slight cotton candy aspect to it, but only slight.  When testing the sweetener in live mixes, I DID notice something INTERESTING, and I think Rick might have eluded to this when he shipped these out.  The sweetener needs some time to STEEP !!!!!   Yes, something I have NEVER done before with ANY sweetener.  It actually UP-steeped, just like many of my Medicine Flower flavors.  QUITE interesting.  This is VERY important, because if you were trying to nudge up some sweetness in a mix, added a few drops, tasted it, and it didn't taste sweet enough, and you added more, it could probably become TOO sweet after steeping, so keep that in mind.

I was actually quite impressed that I got NO off-notes, or even a hint during vaping or finger testing.  I did not experience any muting in my bakery/fruit mixes at or below 1% which may be high for usage, but for my SFT, it was a perfect testing point.  After checking my coils, it CLEARLY showed far less gunking than my usual sweeteners.  Strength wise, I would put it dead smack in between TPA Sweetener and CAP Super Sweet.  Maybe I'll hate the other ones, but this one, I couldn't find anything to fault.  This one stomps out of the gate, as a clean, almost sugar cube-like sweetener that does exactly what it should, with no artificial or chemical aftertastes.  I tried hard to find something to nit pick on this one, but could not.  Just simply, a **10/10**.

**SugarDaddy (Vanilla 2x) (Rick's) 1% (09-18-22)**  --  Yes, you read this right, DOUBLE STRENGTH SugarDaddy with Vanilla.  As you would expect, this was just like the regular version of SugarDaddy, but stronger, AND, with just a slight touch of Vanilla.  Even doubled, I still got NO after-taste or off-notes, pretty impressive.  Now, as far as my perceived strength compared to the Regular, it didn't appear to be linear, meaning it didn't appear to be twice as strong.  After steeping it felt more like 1.5 times as strong, which would put it at, or just above CAP's Super Sweet for comparison.  The taste was just as clean, and sugar-cube like as the Regular version.  The Vanilla was very light, but still present, and hard to nail down, as the cotton candy notes present in the SugarDaddy worked to conceal it's exact style.  Not spicy, but maybe similar to FA's Madagascar would be in the ballpark.  It was just light enough to avoid complete analysis, but strong enough to be present.  I would better call it SugarDaddy enhanced by Vanilla.  As I've stated before, steeping is important for SugarDaddy sweeteners to allow them to fully bloom.  Starting light, and increasing after a steep if needed is the way to go.   At 1% this was fully sweet, but surprisingly it wasn't sickeningly sweet, or over flavored.  It showed no signs of hitting the ceiling, or folding over on itself as flavors (and sweeteners) sometimes do when used to heavily.  Because this was double strength, solo'ing it @ 1% was fairly high, but the addition of the vanilla enhancement(s) kept it interesting, even as a solo.  At this fairly high rate, I did experience slight muting in my fruit recipe, but only slight, and the bakery recipe, showed no issues.  Your usage, and rates, will depend on how sweet you need,  I will admit to rather enjoying this solo'd, and that caught me by surprise.  With no off-notes, no artificial-ness present, and only minor muting at high levels, this one (again) was hard to fault.  Simply a stronger version of SugarDaddy, kissed by a light vanilla accent.  Too hard to knock this one down, and easily **9.9/10**.

**SugarMama (Regular) (Rick’s) 1% (09-18-22)** --  Moving onto Rick's SugarMama.  This one was still VG based, and had the exact same ingredient list as SugarDaddy minus the Sucralose.  How much of a different would it make ??  The SugarMama tasted good off the finger, with a very close likeness to the SugarDaddy, but with a little less impact and "sugar lips" effect.  It still had the same clean, almost sugar cube like taste with no artificial, or off-putting notes.  It did have the same slight cotton candy nuance that SugarDaddy had.  At 1% it felt a little less sweet than SD, but only slightly, which made sense sans the Suc.  If you don't like PG, and Suc, this sweetener should be on your rack, as it worked great with no detectable muting when used as high as 1%.  It worked well in both my test mixes, and should be steeped as mentioned above in the SD review, as it will almost upsteep.  So let it steep before adjusting in any mixes.  Obviously YOUR tastes in sweeteners will dictate whether or not you like, or want Suc included or not.  As was the case with SD, the SugarMama did seem to be far less gunky on the coils than my typical sweeteners.  All in, SugarMama was just as clean, and aftertaste free as SugarDaddy, and it did so without any Suc.  Placing it just below SD, to slightly less impact and sugar lips effect only.  Felt great @ **9.25/10**.

**SugarDaddy (Regular 2x) (Rick’s) 1% (9-20-22)**   --   After a SMIDGE of delay, got to wrap my hands around this one, the last in this series of sweeteners from Rick's at SugarDaddy.  As you may have guessed, but much changed from the original (regular strength) SugarDaddy and this one BUT for the doubling of the strength.  As mentioned previously, I purposely wanted to test these all at the same strength, so I could better gauge the relative differences.   This one continued the EXACT same super clean, sugar cube sweetness as the original, albeit stronger.  I did feel that this didn't present as double strength comparatively, but more like 1.5x stronger, at least that was my perception.  This again, placed it just at or a bit stronger than CAP's Super Sweet.  Tasting this in the bottle was stronger, but still just as clean, and sugary sweet as it was vaping.  At 1%, although fairly sweet, I detected no ceiling smashing, or flavor folding that you can get when over flavoring, and only minor muting in one of the two mixes I tested it in.  All in, it seems that Rick really put some time into these, and the claims of "Less Gunking" and "Very little or NO Suc" were accurate claims.  Clean, sugary, and sugar cube like sweetness just like the original.  Finishing out this series with yet another **10/10**.

Due to some recent issues with counterfeit / altered versions of the Sugar Daddy sweeteners, currently (soon to change), OSDIY is stocked with the real versions.